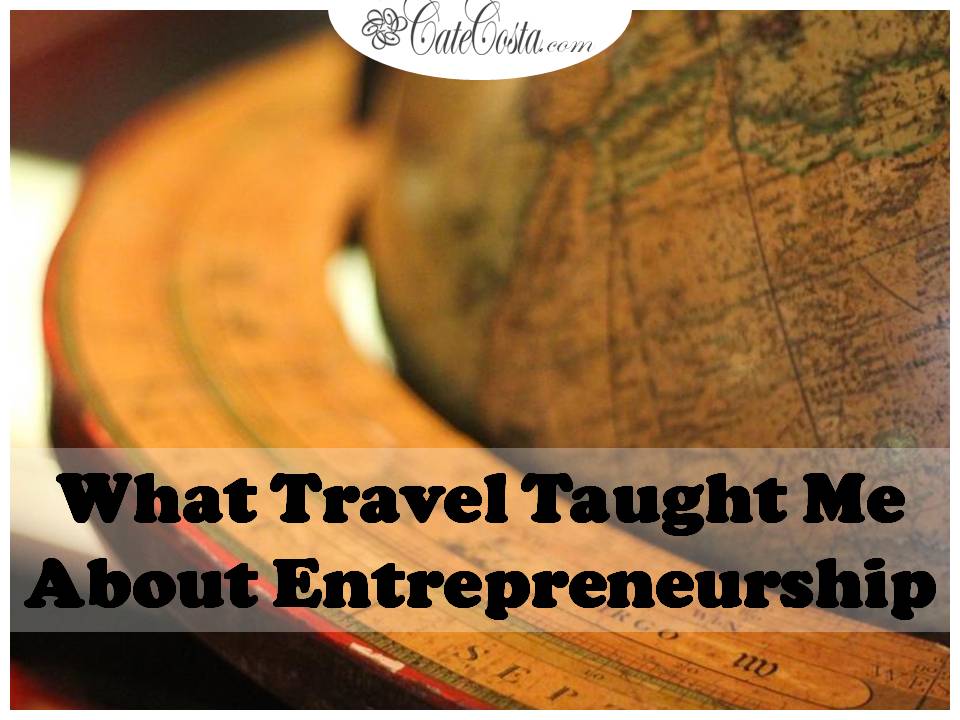 As many of you know, I have spent the past 2 years as en entrepreneurial nomad moving to a different country every couple of months and exploring the entrepreneurial ecosystems in each. I’ve interviewed dozens of entrepreneurs, investors, and incubator and accelerator managers to learn more about what’s happening in the startup scene in cities around the world. If you want to see some of those interviews, you can check out my Startup Nomad blog.

This type of travel poses its own particular set of challenges and adventures and it’s surprised me how much I’ve learned about myself and about entrepreneurship by living out of a suitcase and having to find my place in a new community every couple of months, so this week I’m going to share some of the insights I’ve learned through travel that can help any entrepreneur in his or her business. Fair warning, there will be a little more fluff and smushy stuff than is normal in my posts.

The first lesson I learned is to expect the unexpected. Now, clearly, this isn’t a new concept, but anyone who’s ever tried to fly anywhere knows that you can’t count on your plane leaving on time, you might miss connections, your bags may never show up. There’s a lot that can go wrong when you travel and any setback usually has a ripple effect that causes a host of other problems down the line. If you let the fact that your flight was canceled mean you didn’t take your trip or the fact that the airline lost your suitcase mean you didn’t enjoy your cruise, however, you’d be making yourself miserable for no reason and failing at being a good traveler. Yes, unforeseen issues are going to arise that make your travel frustrating and will require you to alter your plans, but that doesn’t mean that your entire trip is a failure. The same holds in entrepreneurship: I can pretty much guarantee that not everything will going according to your business plan and you’ll have to quickly adjust your strategy if you want to stay in business. Not being able to predict every scenario is not what leads to failure in business. Letting those unforeseen issues fluster you to the point where you can’t simply adjust and keep moving forward is what leads to failure in business. Just as you would simply find another flight or a completely different means of transportation if your flight was canceled, you just need to find another customer or a new line of revenue if your biggest contract goes south.

The second lesson builds on the first and it’s that there’s always a solution. As I just said, if your flight is canceled, you find another way. If a customer goes to a competitor, you adjust. When properly managed, it’s incredibly rare that a business will fail because of one bad bit of luck. What’s more common is that an issue in a business is not addressed and so it cascades out, causing a whole host of other problems in the business, which, in combination, eventually lead to its failure. Adjusting your business strategy when an issue arises is no different than changing your itinerary to account for bad weather. There’s a solution out there, just don’t panic and you’ll find it.

Still building on the first two lessons here, number three is that you control how you react. We’ve all seen those jerks that have complete meltdowns if there’s a flight delay or start screaming if the wrong kind of pillows are put in their hotel room. Sometimes there are even those awful people who go to a country where English is not the native language and are somehow enraged when they come across someone who doesn’t speak English. Imagine if a tourist came to see the Grand Canyon and then started cussing the tour guide out for not speaking Chinese or German. It’s ridiculous and, quite frankly, you’re not very likely to see anyone but a person from the good ol’ US of A behave that way. Given the poor behavior of some that I’ve seen, when I travel, I am always incredibly conscious of how I present myself because I know that there are stereotypes of how Americans behave out there and I never want to perpetuate those stereotypes. So, even when something really frustrates me while I’m abroad, I make a conscious decision not to react to it. It began because I didn’t want to be “that hot-headed American” but then I realized that it was really nice to just let stuff roll off my back. It made life way more enjoyable and then I had an epiphany: if I can control how I react when I’m abroad and that choice makes life better for me, I can control how I react wherever I am. I used to roll my eyes and be annoyed when people would say that it’s up to you how you feel about situations, but now I am a believer. It’s just a muscle that needs to be exercised and you’ll get better and better at consciously choosing your reaction the more you do it, and there is no place where this skill is more useful than in entrepreneurship. Being an entrepreneur is stressful, uncomfortable situations will constantly be thrown at you, and your every action will affect the reputation of your business because you are the owner. Therefore, the ability to control how you react to certain unexpected issues or problem customers will have an incredible impact not only on your business’ likelihood of success but also on your own sanity and happiness as a business owner. I’m really tempted to splice in some of my favorite renditions of “Let It Go” from Frozen right here, but I will resist. You’re welcome.

One way to help yourself out with controlling how you react to things is to realize that you can’t know the intent behind someone’s actions. Different cultures have different cultural norms, so you don’t always know why someone is doing the things they’re doing. For example, I’ve been out to eat abroad with many people from the U.S. who become frustrated or even angry about the service at restaurants abroad because they feel the wait staff isn’t attentive enough – they don’t come check in often enough, they don’t automatically bring the check when they see you’re done eating, stuff like that – so they decide the server is lazy, not paying attention, or has some problem with them. The reality, however, is that in a lot of places around the world it would be rude for the waitstaff to behave the way they do here because constant interruptions would be considered intrusive and bringing the check before it’s requested would be like asking a diner to leave before s/he had said she was ready to go. In the past, as soon as I’ve explained this, the people I’m with completely change their emotional state. It’s like a flip is switched and they’re no longer pissed. In this situation, they thought they knew the intent behind the action and their assessment of that intent made them angry, but they were wrong. The same applied in business. You have no idea why your jerk customer is acting like a jerk or why your supplier is raising prices. Yeah, of course, sometimes they’re just being jerks, but you’ll save yourself a lot of angst if you just assume the kindest possible explanation for any action instead of the most negative one, unless you have a reason to think otherwise. Still make sound business decisions – if the supplier’s prices are too high, switch to another supplier – but there’s no reason to bother wasting your energy being angry about it.

Finally, whatever issues you’re having in your business, appreciate what you have. If you travel outside of your own country or even, sometimes, outside of your own neighborhood, you’re likely to see you have it pretty good. You’re watching this video right now, which means you have a high speed internet connection and some free time. You’re doing pretty well. When you have a shitty day in your business, just remember you have your own business and be thankful for it. Yeah, maybe you didn’t hit your quarterly revenue target but you’re not a child begging in the streets in India or a young adult in Argentina who just found out that your parents are actually adoptive parents who murdered your biological parents because of their political beliefs. Things could much worse.

14 Replies to “What Travel Taught Me About Entrepreneurship”