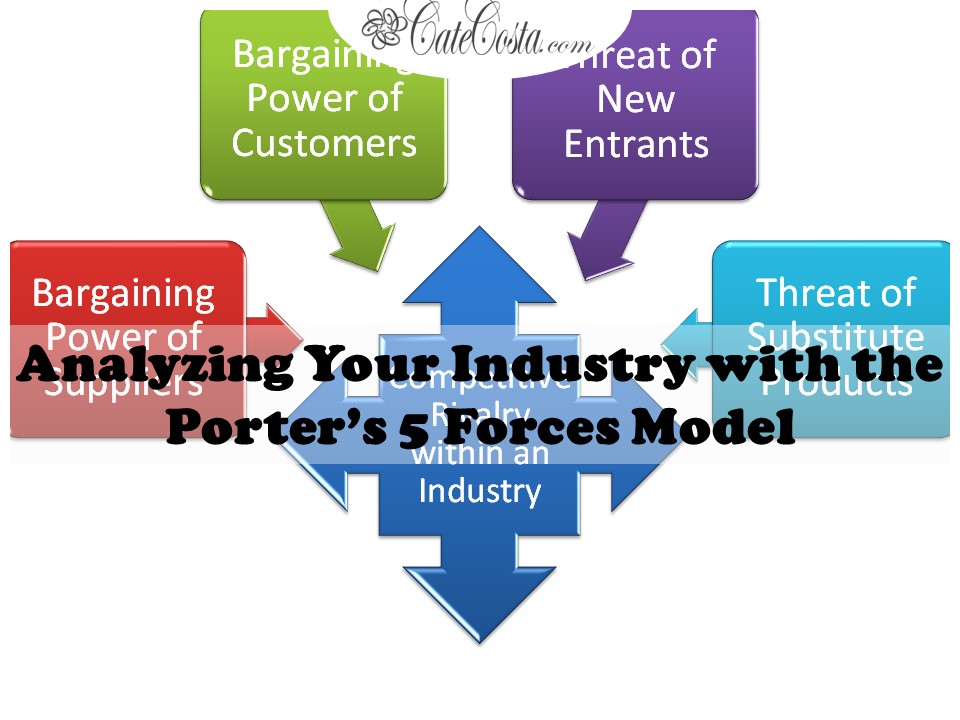 Today we’re continuing the summer reboot (even though I guess it’s technically fall now) and remaking an old video of mine to teach you how to use Porter’s 5 Forces model to help develop the strategic plan for your business.

When developing your business plan, you’ll want to learn about and assess the industry in which you will be operating. One way of doing so is by using a tool called Porter’s 5 Forces model. It identifies 5 forces that act on every company:

The bargaining power of suppliers refers to how much power to negotiate price and other terms your suppliers have. If you’re a small company and building a product with rare inputs that are only sold by a handful of companies, your suppliers probably have a lot of bargaining power because if you don’t buy from them you won’t be able to get what you need elsewhere. On the other hand, if you’re a massive company and purchasing commodity products that are easy to get from a number of different suppliers, then the bargaining power of suppliers is severely limited because if you don’t like their terms you can just go elsewhere. Walmart’s suppliers have very limited bargaining power whereas the suppliers for a top chef who needs a very specific and rare ingredient, such as a particular truffle, have quite a bit.

The threat of new entrants refers to the barriers of entry into the industry and whether they are strong enough to prevent a lot of new companies from jumping in to compete or whether they are particularly weak and the market could easily be flooded with a bunch of new competitors.

The threat of substitute products refers to the ability of a customer to decide to use a different product instead of yours to solve the same problem or meet the same need. This doesn’t mean that the customer chooses the store brand deli meat over the Boar’s Head – that’s just competition within the same product. It means that the customer decides not to buy the deli meat at all and instead purchases spam. The threat of substitute products is often overlooked by new entrepreneurs who will come in and say they have a brand new product with no competition whatsoever. However, substitute products should be viewed as a type of indirect competition. The first microwave competed with the conventional oven even though it was a brand new product because the conventional oven was a substitute product.

Finally, the last of Porter’s 5 Forces is competitive rivalry. This is pretty self-explanatory and refers to the other players in your market with whom you compete.

Now that you understand the concept behind Porter’s 5 Forces, let’s analyze how these forces affect your potential business. Take a look at the figure to get a better understanding of how you should think about what affects each force and then use that knowledge, to assess how the 5 forces will act on your business. 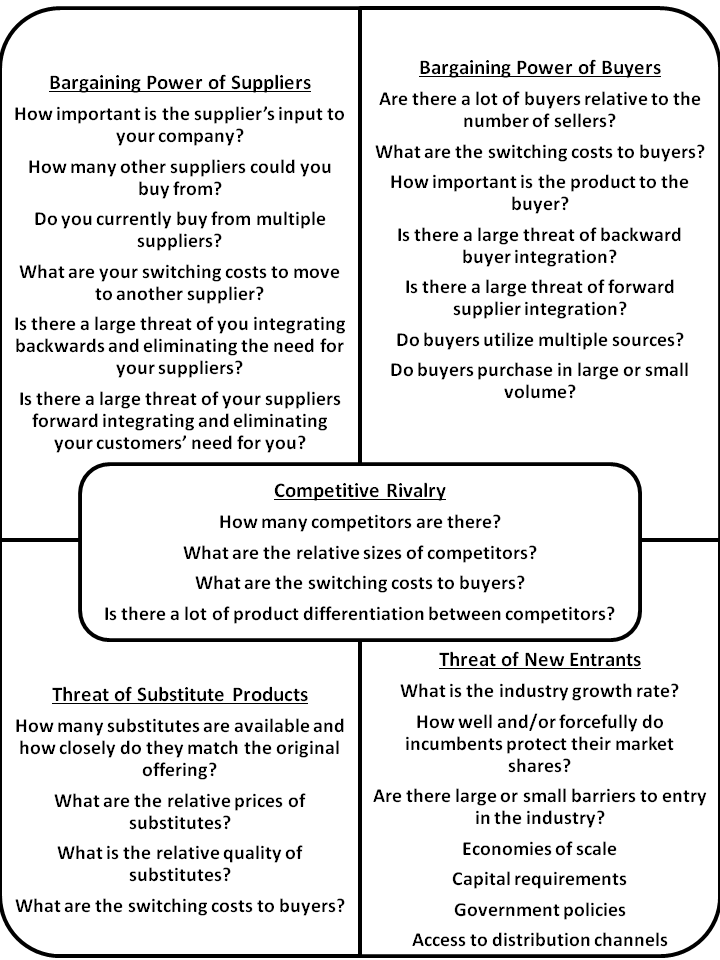 As you do so, it’s important to recognize which forces may make it especially difficult for you to create a profitable business and which ones may actually work to your advantage. Be thorough as you analyze your business to make sure that you carefully consider all of the possibilities within each type of threat and whether that particular threat poses a large danger or a small danger to your budding business. This knowledge will be invaluable to you when you’re first deciding whether to move forward with building your business as well as each time you re-assess your strategic plan.