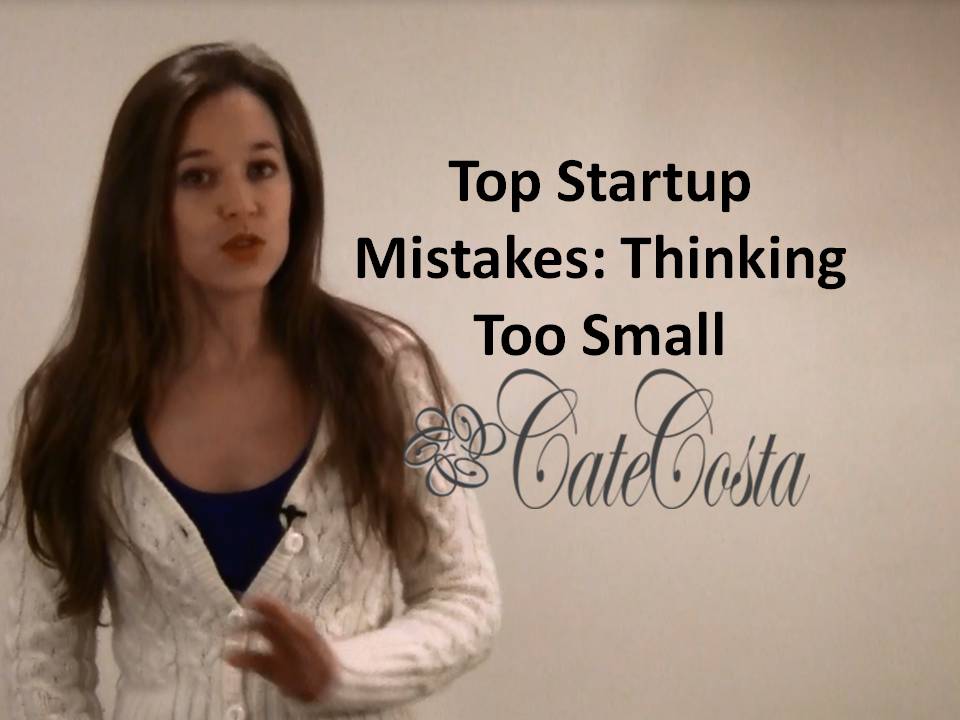 People often write asking me to elaborate on pieces of articles I’ve shared so I’ve started a series to do just that. I may combine a few or leave a few out here and there, but I will cover the topics that people asked me to elaborate on. I recently posted an article from Entrepreneur about common mistakes people make when launching a new company. The next of those big mistakes: not dreaming big enough.

Welcome back to New Venture Mentor, I hope your 2015 is starting off splendidly well. As we move into the new year and everyone is still succeeding at their resolutions because we’re only 2 weeks into them, I want to give you just a quick episode today about how thinking too small can really hold entrepreneurs back.

Entrepreneurs often fall into one of two categories: they think they’re the next Steve Jobs and that they’ll soon be billionaires or they lack confidence and are constantly worried about failing. While both can cause major problems in your new startup or small business, this week we’re going to talk about the latter issue, a lack of confidence.

Becoming an entrepreneur is a bit crazy. Clearly, you have to be at least somewhat prone to optimism to become an entrepreneur because we know that most new businesses fail and yet we believe that our business will be different. At the same time, however, most entrepreneurs are also prone to bouts of anything from mild self-doubt to sheer panic and it’s these doubts that often lead entrepreneurs to think to small and limit the success of their businesses.

Now, when I say this, I don’t mean to say that every single entrepreneur should be dreaming of building an empire, that’s not what everyone wants. I do mean to say, however, that you need to do a gut check every now and again to make sure that having set a low bar for success isn’t holding you back from growing your business in a way that would actually be more aligned with your goals.

Let’s say you opened a bakery because you wanted to share your grandmother’s delicious pies with as many people as possible and be able to support your family. Remember those two goals: share pies with as many people as possible and support your family. Now let’s say that your bakery does really well, everyone in the neighborhood loves you, and you’re making enough profit to live comfortably. Woohoo, this is success, right? At this point, most entrepreneurs either say, “Great, I accomplished my dream,” and keep operating their one bakery or they may expand by opening a second location of their bakery. Those are both valid choices if that’s what you want to do, but that’s small thinking. What about if you partnered with the area grocery stores to have them sell your pies in their stores? What if you went even bigger and partnered with a regional baked goods distributor and had your pies sold throughout the surrounding states? What if you licensed the recipe to another company entirely and you didn’t have your name on the pies, but they were shipped and enjoyed by people all around the country? Maybe you think those are awesome options and maybe you don’t, but the point is that they would accomplish your goals of sharing the pies with as many people as possible and supporting your family in a much bigger way than your little bakery and if you think too small you won’t ever even consider them.

Beginning your 2015, just remind yourself that while it’s okay to choose to have a business as big or as small as works for you, you should at least entertain the idea of thinking big because you may never know what options are out there for the expansion of your business unless you take a look.

That’s all for this week – I told you it would be a quicky. If you liked this video or found it helpful, please let me know by giving it a big YouTube thumbs up and if you want to really show your love by helping fund this channel so you can keep getting free tips and info to help your business grow, I will be forever appreciative. Also, don’t forget to get over to CateCosta.com, if you’re not already there, and sign up for my newsletter so you’ll get all of the latest delivered right to your inbox every Tuesday morning. Plus, just one last favor to ask, as I’m filming this I have 1,495 subscribers here on YouTube and I would absolutely love to make it up to 1,500 by the end of the month so, if you don’t mind, please click the subscribe button and help me reach my goal.

Thanks so much for your support and I’ll see you next time on New Venture Mentor.