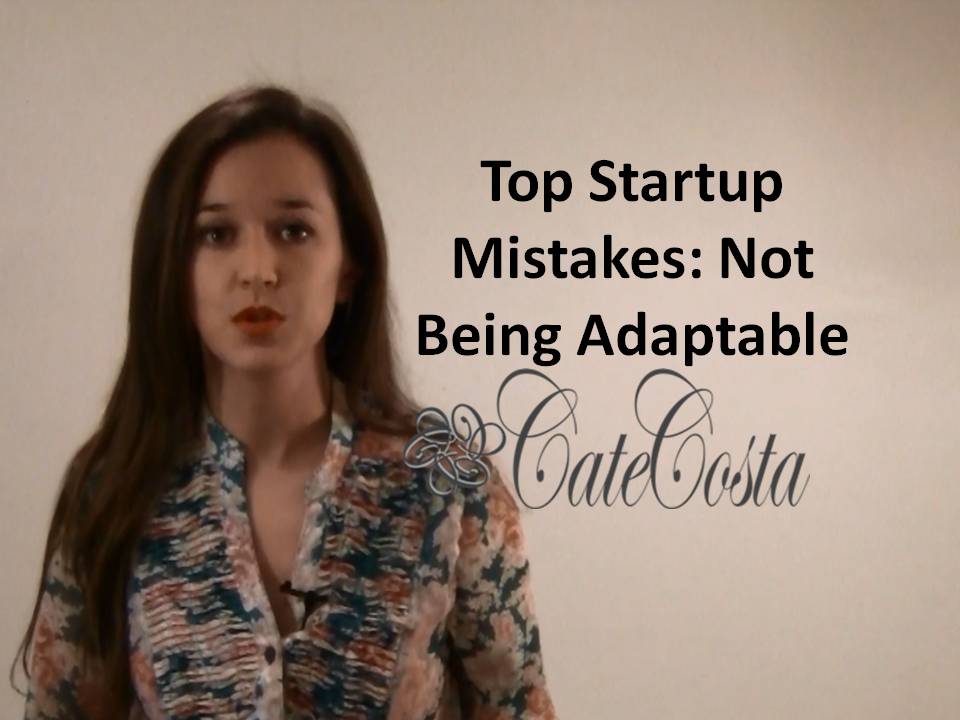 I post tons of articles that I find around the web to help answer questions for my followers and help you all move your businesses forward. People often write in asking me to elaborate on pieces of those articles so I’ve started a series to do just that. I recently posted an article from Entrepreneur about common mistakes people make when launching a new company. The next of those big mistakes: refusing to adapt.

Becoming successful in entrepreneurship requires a delicate balance. You’ve probably all heard the advice that you need to power through and believe in your idea no matter what, but you’ve probably also heard that nothing ever goes according to plans and you need to be able to pivot, pivot, pivot until you produce something that customers want to buy. In addition to the fact that the word pivot is so over-used that it now sounds like nails on a chalkboard to me, these two pieces of advice in combination just don’t seem to make much sense. Either you need to be completely dedicated to your idea even when nobody else believes in you or you need to be willing to throw that idea out the window to follow the customer’s whims, but you can’t do both at once, right?

Let’s try rephrasing that second bit about pivots to make this all a bit more clear and to allow me to stop saying the damn word pivot. Now, while it’s absolutely important that you believe whole-heartedly in your idea when you’re an entrepreneur, that doesn’t mean that you can ignore everything else that is going on around you in the world and, more specifically, in your industry. As Charles Darwin said, “It is not the strongest of the species who survives, nor the most intelligent; it is the one that is most adaptable to change.” Click here to tweet this quote. However, adaptability doesn’t necessarily mean a complete, 180 degree change; it simply means recognizing changes to the environment and adjusting to take advantage of the opportunities and avoid the pitfalls that those changes create. The most successful entrepreneurs adapt to the environment, yes, but they also change the environment to fit their goals.

Let’s think about this through a few examples. Let’s say you make a zero calorie soft drink and then the government in one of the countries where you sell it outlaws the use of your main sweetener. Refusing to adapt means not changing your formula and facing legal action and the loss of all business in that country. Clearly, clinging to your original idea makes no sense in this case. You have to adapt to the situation and change your formula and/or contest the new law in court, but that doesn’t mean you immediately toss out your original concept.

Or what about if you make an educational phone app to help kids learn how to read. You begin testing and it turns out that the reading app doesn’t really outperform other apps in general but is a superstar when it comes to teaching kids whose first language is not English learn to speak and read English simultaneously. You never intended your app to be for language learning but now you have a decision to make: keep on your original course and market an average solution to the whole market, change course and start over building a new app for the original market, keep this app but now focus on English as a foreign language students, or do options 2 and 3 simultaneously. Clearly, option one isn’t likely to be the most successful choice, so you need to adapt.

Let’s look at it from the other side, however. Let’s say you’ve been a singing coach for 3 decades and you have an idea for an app that would help voice students learn to match pitch more easily but as you’re sharing the idea people tell you that there aren’t really enough singing students around to make your app worthwhile and you should instead create an app that helps people learn math because STEM is hot right now. Well, whether or not your original app would be successful, it makes no sense for you to change course and try to build something you know nothing about just because the potential market may be bigger.

Adaptability isn’t about allowing yourself to become unfocused on an idea and just bouncing around wherever the wind blows you. Adaptability is about recognizing changes to the environment in which you’re building your business and making sure you make small adjustments to keep yourself on track and moving forward.

Knowing how to tell the difference is one of the skills that sets great entrepreneurs apart from the rest. If you need some help trying to figure it out, you can start by checking out my video on whose advice you should listen to and whose you should ignore as well as the one on how to conduct market research. Both of those will help you gather the information you need to be able to make the right decisions about whether to change direction or stay the course.

Did you like this video? If so, please let me know by making a small fan funding donation to support my YouTube channel and keep the videos coming. If you can’t give anything, no worries, but a free thumbs on YouTube would also be much appreciated. Plus, make sure you subscribe to the channel so you’ll be the first to know when new videos go live and, if you prefer to get my latest blog posts right to your inbox, be sure to subscribe to my newsletter.

Thanks so much for your support!

One Reply to “Top Startup Mistakes: Refusing to Adapt”