Mexico was amazing and I can’t wait to get back there to dig a bit deeper into all of the opportunities that I discovered, but now I’ve moved on to Costa Rica and looks like this is going to be a wonderful stop on my Latin American journey as well!

Costa Rica has a lot going for it in comparison to some of the other Latin American countries: it boasts solid infrastructure (which is always important because it can get pretty tough to build the next Google if your internet doesn’t work), a great education system and well-educated work force, the presence of some power players – like Intel, and growing interest in building the entrepreneurial ecosystem in the country. On the down side, however, Costa Rica is a small country of approximately 4.5 million people and it’s becoming increasingly expensive. Entrepreneurs in Costa Rica need to set their sets on the larger Latin American (or other international) market because the country is simply not large enough to provide a customer base able to sustain the type of growth that would interest equity investors and it needs to find a way to differentiate itself from the rest of the region in order to justify the additional costs of setting up shop here, as compared to some of the other, much less expensive countries.

During my first week in San Jose, the Costa Rican capital, I was lucky enough to be able to attend the presentation of the Global Entrepreneurship Monitor’s report on Costa Rica. This is a bit of a big deal because Costa Rica has only been included in the GEM reports for the last few years and the event included a brief speech from the country’s Commerce Minister.  Because data on Costa Rica has only recently begun to be gathered for GEM, the graphs are not nearly as useful as those I showed you for Mexico. However, it’s exciting that Costa Rica’s ecosystem has grown enough that they are at least now on the map and being included in reports like those produced by GEM.

Hopefully, the next few years will show continued growth for entrepreneurship in the country, but there are definitely some challenges to be overcome if Costa Rica wants to become the Central American Silicon Valley.

In Costa Rica, I began by talking to entrepreneurs so we’ll have 2 weeks of interviews with the business owners on the ground in the country. Then I’ll speak with a couple of former PE professionals who are building a modern business incubator and partnering with Costa Rica’s largest angel investor group to make sure promising young startups get access to the resources – both educational and monetary – that they need to succeed. Finally, I’ll finish off my stint in this Central American startup hub with a chat with the Founder of Startup Costa Rica.

I’ve also had some pretty great adventures seeing the sites, so make sure to take a look at the Where in the World? section to get a taste of the fun things you can get into in between business meetings.

La Paz Waterfalls and Sanctuary is one of the more popular tourist activities in Costa Rica. The main attractions, of course, are the two waterfalls but you won’t get to them until you first make your way through the sanctuary exploring the flora and fauna of Costa Rica and the Costan Rican rainforest. You’ll see amazing greenery in addition to bird habitats where you can even hold a toucan on your arm, a butterfly house, reptile buildings, hummingbird clusters, jungle cats, monkeys and a host of other creatures. You can even take photos in a colorful ox cart.

After you make friends with some animals, you’ll “hike” along a path to get to the waterfalls. I believe the waterfalls are between 35 and 37 meters each – definitely worth seeing and very pretty, but they’re certainly not the largest you’ll see in the world. 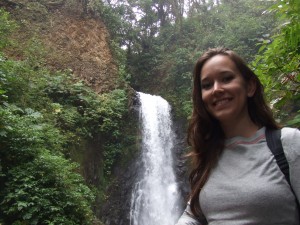 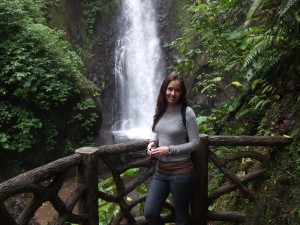 This video will take you through a mini tour of the sanctuary and waterfalls starting at the beginning of the tour and ending at the waterfalls, so be patient!

The visit to La Paz was part of a larger combo tour in Costa Rica on which we also visited the Doka Coffee Plantation and Poas Volcano so keep an eye out for those posts soon!