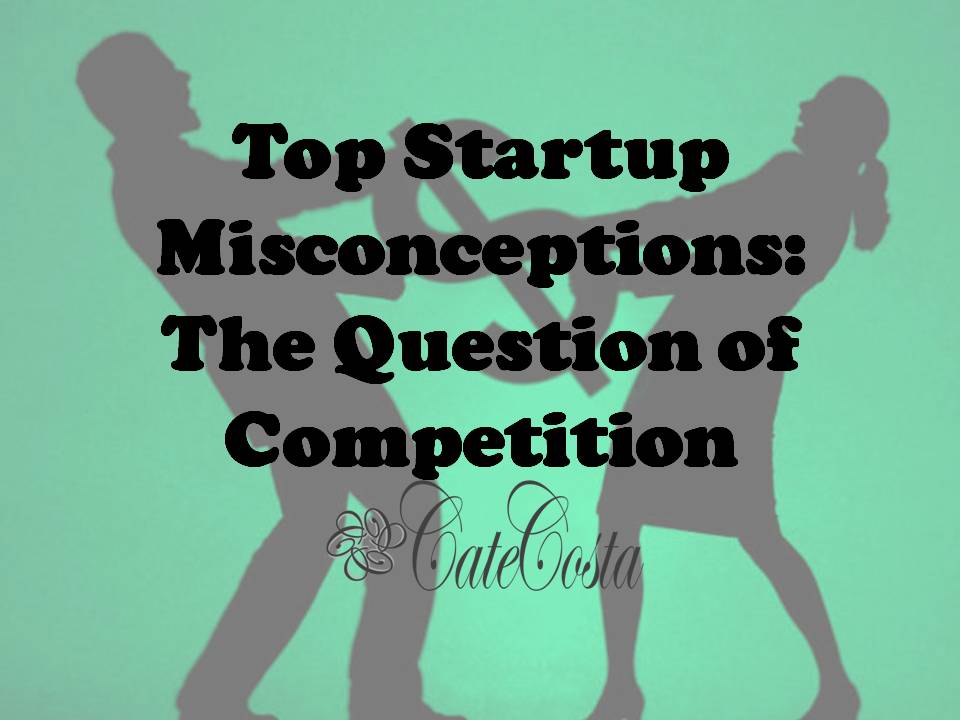 In my effort to always provide a steady stream of useful information to entrepreneurs and aspiring entrepreneurs, I post tons of interesting and helpful articles that I find around the web that I think can help answer questions for my followers and help you all move your businesses forward. Oftentimes, people write me asking to elaborate on those articles or pieces of those articles so I am starting a series that will do just that. I may combine a few or leave a few out here and there, but I will cover the topics that people most often asked me to elaborate on.

I recently posted an article from RockthePost about common misconceptions people have about launching a new company. The next of those misconceptions that I want to tackle here is a two-sided confusion about competition.

Let’s start with the idea that you can’t start a company unless you have an idea that nobody else is working on. Firstly, that’s never going to happen. As I mentioned in a post about why entrepreneurs shouldn’t be scared to share their ideas, you’re not special, so thinking that you’re the only one working on a particular idea at a particular time is delusional. If you’re in the United States, even if your idea is truly “one in a million,” there are still about 312 other people working on that same idea right now. Have you ever wondered why most VCs refuse to sign non-disclosure agreements? It’s because they’ll probably be pitched basically the same idea by a number of different entrepreneurs and don’t want to open themselves up to getting sued. Have you wondered why you often here people talking about investing in the team more so than in the idea? It’s because good ideas really are a dime a dozen. It’s the execution that makes success stories.

With that said, you don’t have to abandon a great idea just because you see others out there with the same or similar idea. There is still an opportunity for you to find success by somehow setting your company apart and offering the same or similar products or services but doing it better, or faster, or more accurately. You absolutely need to have a value proposition that will set you apart from other companies in order to succeed. That doesn’t mean your idea has to be so original that nobody else has ever thought of it. Google was not the first search engine; Facebook was not the first social network; BMW was not the first car brand. If you want to build a business, focus on how you can add more value for the customer than anyone else out there, not on how you can come up with an idea so off the wall that nobody else is working on it.

Along similar lines, you have to understand that there will always be competition so, even if you think that you’re the only working on something, you can’t rely on being the only company in the space for your success. Firstly, as I mentioned before, you’re probably not actually the only one working on that idea. The other companies may be in stealth mode or may simply not have gotten enough traction yet for you to hear about them, but they’re probably out there. Secondly, even if by odd circumstance you are the only company working on something, you can bet your booty that competitors will start coming out of the woodwork if you find success. You must have something that sets you apart from the competition in the eyes of the customer or you’ll be in trouble.

In order to find success you need to understand that your obsession with competitors cannot be about whether or not they exist – they always will. It has to be about how you’re different than those competitors; how you offer more to the customers you’re fighting over; how you operate more efficiently than those competitors; and how you will continue to stay relevant, even if the space gets crowded. For more info about how to set yourself apart, spend some time poking around this site for tips.

Now I want to hear from you: Have you found yourself falling into one of these competition misconception traps? Please let me know in the comments section below and, if you haven’t already, sign up for my newsletter so you’ll never miss any info that could help you successfully grow your business.

If you liked this video, please spread the love by liking it and sharing with anyone whom you think would find it valuable. Thanks for watching and we’ll see you next time on New Venture Mentor.