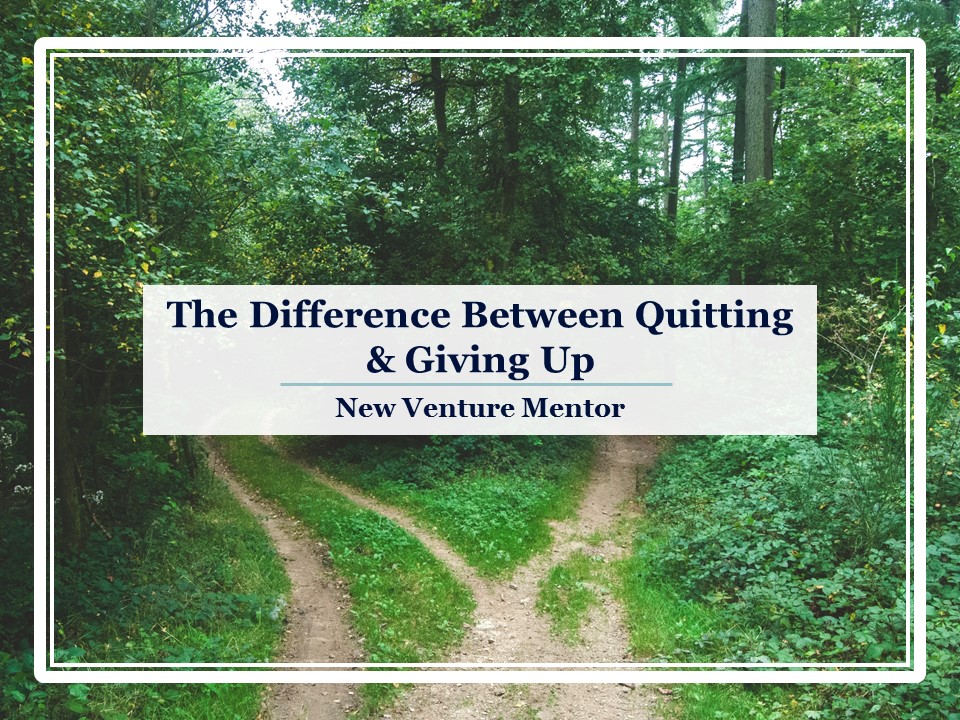 Today I want to take a quick moment and discuss the difference between quitting and giving up and why, sometimes, quitting is the absolute best thing you can do for your chances of success as an entrepreneur.

This isn’t going to be the most uplifting New Venture Mentor video ever, but it’s important, and it ties closely in with an old video of mine about understanding sunk costs. Despite the popularity of the idea of a culture of failure and the concept of failing fast, let’s be real, nobody likes the idea that their business might fail. Most of us will hang on until the very end when there is literally no life left in our business because 1) it’s our baby and 2) we’re embarrassed to admit to those around us that it  failed.

Here’s the thing though, if you want to live to fight another day in this battle that is entrepreneurship, you have to learn the difference between quitting and giving up. Quitting is simply deciding you’re not going to do something anymore; it’s not necessarily a bad thing. You might quit smoking, you might quit obsessing about your ex, you might have quit your job that made you miserable to start a business. Giving up, in my mind, has a different connotation. A quick Google tells me that “to give up” means “to cease making an effort; resign oneself to failure”.

I don’t know about you but I am totally cool with deciding to quit doing something because it’s not working for me anymore but I am not cool with giving up and resigning myself to failure. I know I am playing a semantics game here and I don’t mean for you to literally get hung up on the definition of quit versus the definition of give up. What I do want, however, is for those of you struggling with your businesses to really think about what the best course of action is without thinking of closing it down as some horrible failure to be embarrassed about. Take an objective look at where things are, what would need to be done to right the ship, and what you can realistically accomplish and compare that with what would happen if you decided to close up shop. Countless entrepreneurs out there had numerous not so impressive businesses before they started the one that took them over the top. Make sure you don’t miss your chance for the big hit business because you pour good money and time after bad trying to prop up something that didn’t work. Maybe your beloved jeans are just too torn up to even hold together at this point and you need to convert them to cut-offs so you stop looking like a homeless person just because you can’t let go of what was. Bad metaphor, I know, but I’m just saying. On the other hand, don’t throw in the towel too early just because you hit a rough patch and don’t want to put the effort into finding a solution to your current problem.

Once you understand the difference between quitting and giving up, you should be better able to objectively evaluate when you need to call it, and when you need to just keep working to find the solution.