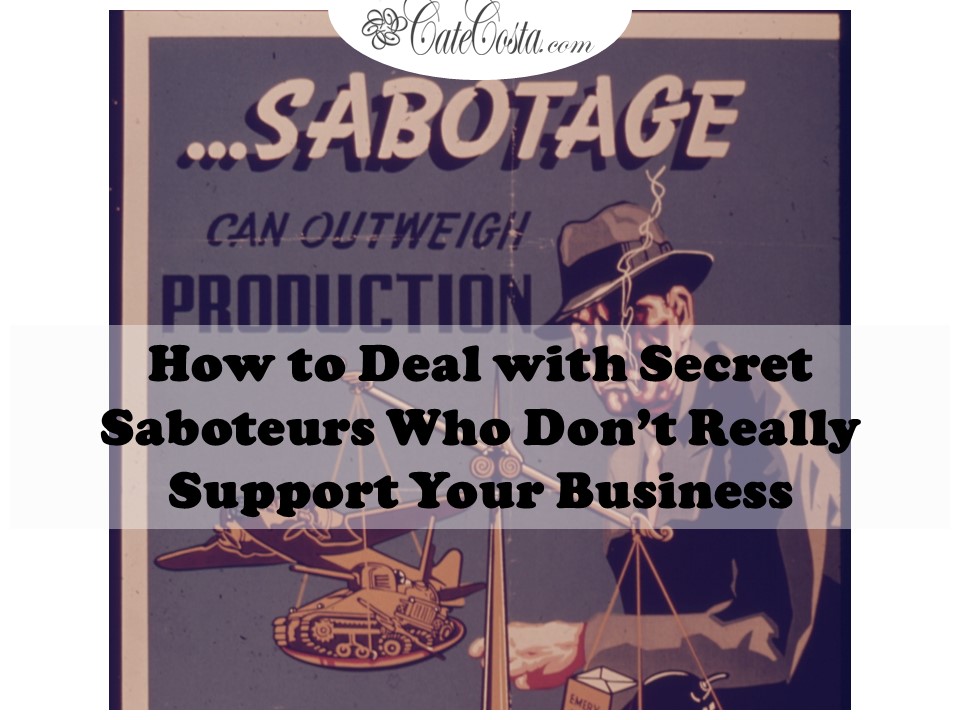 I’m usually no-fluff, but today we’re going to talk a bit about dealing with haters and naysayers because you need to be able to ignore them to succeed and get the most out of entrepreneurship.

If you’re an entrepreneur, especially one who has a sizeable internet presence, you’re going to end up with some haters. I’ve talked about this before and given some tips for how to deal with internet trolls. Trolls, however vicious they may be, are actually easier to deal with in some ways than a more subtle type of hater, however, known as the secret saboteur. The troll is totally upfront about the fact that he or she is there to be a jerk and wants you to feel bad about yourself and all of the choices you’ve made. You can’t please a troll, and it’s clear you shouldn’t try, so you eventually just learn to have a thick skin and move on. The secret saboteurs, however, are much more difficult to avoid because they act like they’re supporting you on the surface when they’re actually undermining you. The favorite tools of the secret saboteur are the backhanded compliment, the pointed question asked in a way to try to pretend like it’s not inappropriate, and the unempathic hole poke.

Now, usually these haters are actually those closest to you: your parents, your best friend, or maybe those a little more removed but close to someone who’s close to you. They may not even realize that they’re being haters, but their behavior isn’t supportive and it exacerbates the constant doubts and waves of highs and lows that come naturally with entrepreneurship. These are the people that let you crash in their guest bedroom when you’re just starting out but constantly mock you about being a hippie and not having a “real job”. These are the people that say to your boyfriend, “We really like her but what exactly does she do?” and, when he answers, follow up with, “Okay, but how much money does she make?” These are the people that say things like, “I really love the work you did for us. It’s some of the best I’ve seen. If I didn’t know better I’d think you’re a real company.”

Can you tell I’m giving real examples, here? Not all of these are my own examples, of course, but they’ve all actually happened to myself or to other entrepreneurs I know. The issue with this type of hating is that it’s not so cut and dry as a troll’s hating that you know to immediately discard. Their comments and actions seem supportive at first, but then they add in that extra bit to try to sow seeds of doubt in you…and seeds of doubt are poisonous to entrepreneurs at the beginning of their journies.

So, how do you deal with these guys? Well, it’s unlikely that you’re going to stop hanging out with your parents, best friends, or significant others or stop working with clients because they don’t consider your work “real work.” These relationships are valuable to you, in one way or another, so you have to have strategies to deal with them. Here are 3 tips to help:

Option #1 is to proactively address the issue. As I said, the secret saboteurs often don’t consciously realize how many little cutting remarks they’re making. Sometimes just pointing it out and explaining how it makes you feel will nip it in the bud. Try something like, “Hey, important person, I know you don’t realize it, but when you make comments about me not having a real job it really hurts my feelings. My business is a real business and I am making progress in growing it, but it’s hard to stay positive when you keep undermining it by acting like it’s a hobby. Do you think you could lay off on the hippy jokes since I’m actually making a lot of progress even though the business is still very young?” Who knows, maybe they’ll stop it.

Option #2 is to learn to ignore it. I’m sure no shrink in the world would recommend this as a good strategy for your mental health but luckily I am just some chick on the internet spouting off, so I can. There are some people you just know won’t stop it, even if you ask them directly, so you don’t want to make it worse by bringing it up. Don’t completely hide your head in the sand, but instead of trying to change the behavior of the other person, change your reaction to that behavior by coming up with strategies for how to deal when they make one of their comments that gets under your skin. Those strategies might be mature and positive and involve reminding yourself of all of the rewards you’re reaping as an entrepreneur, all of the success you’ve had so far, what you’re working towards, and why you love this person even though they do stuff like this that bothers you, or they might be immature and negative and involve telling yourself that the other person is probably just jealous of the freedom of your lifestyle and your bravery to build something of your own while he or she toils away in a middle management job, which he or she has told you sucks the will to live. I’m not here to judge, whatever works for you.

Option #3 is to compartmentalize and goes hand in hand with #2. Simply find an awesome group of supportive people who understand you with whom you discuss your business and stick to other topics with your loved ones who don’t know how to play nice. It’s not your boyfriend’s friend’s business how much money you make any more than it’s your business how much he makes, so just don’t go there at all. It’s good to have some people you just don’t talk work with at all anyway so that you can just be in relaxation mode.

Haters, even the nice ones, pretty much just come with the territory in entrepreneurship so you need to develop your own strategies to deal with them. If you have any good tips of your own, please share them in the post comments.