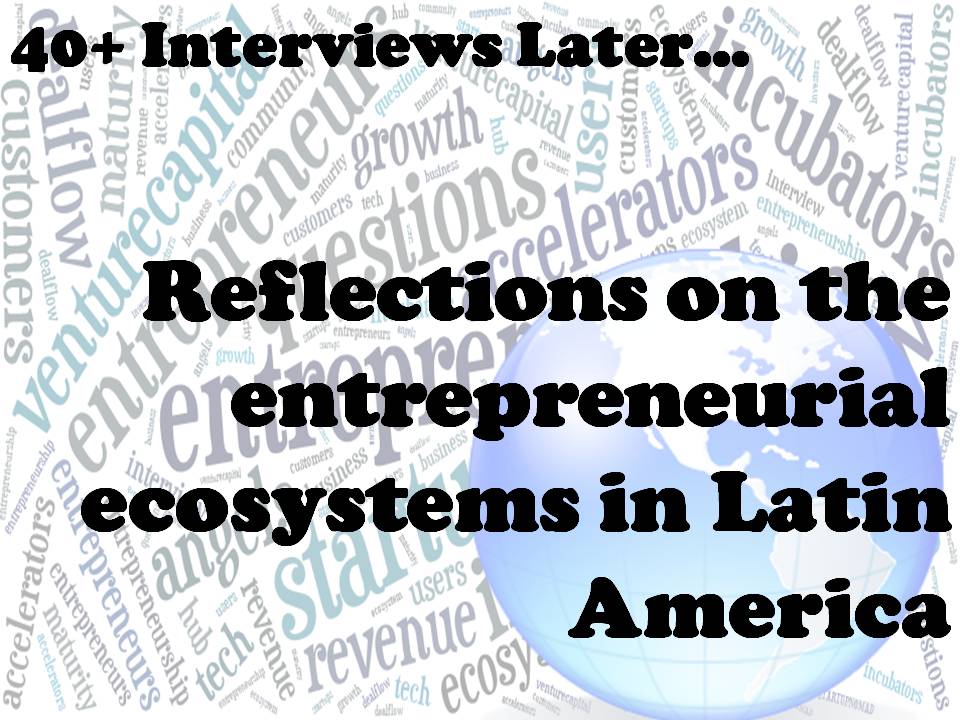 Some of what I say will probably rub some people the wrong way, and I do not claim to have any answers, but these are my honest reflections and suggestions for the growing entrepreneurial ecosystems in Latin America.

Stop putting the U.S. on a pedestal…

One of the very first things that I noticed when exploring the entrepreneurial ecosystems in Latin America was that people there had a tendency to put the U.S. and our startup scene on a pedestal. I can’t count the number of times people said things to me like, “In the U.S. all of the entrepreneurs already know this but here we haven’t learned yet,” or, “Entrepreneurs in the U.S. are more prepared; they know how to do all of the things that entrepreneurs here mess up.” While this idea that people from the U.S. have all of the answers when it comes to entrepreneurship certainly helped open some doors for me as I toured Latin America, it’s incredibly harmful to the ecosystems emerging in the region because it’s simply not true and it holds growth in these regions back.

Yes, there are certainly some ecosystems in the U.S., like Silicon Valley, that are much more mature than the vast majority of the world, that’s undeniable. The issue, however, is that if entrepreneurs and new investors from other parts of the world think that every single entrepreneur in the U.S. has all of the knowledge of the select few entrepreneurs that have managed to get funding from brand-name VC firms, they’ll look down on their own ecosystem. This lack of confidence in themselves and in their home ecosystem was something that came up over and over again in interviews as one of the things holding back the growth of those ecosystems and the success of those entrepreneurs.

Google is your friend…

While I don’t think that entrepreneurs in Latin America are far behind the knowledge level of the vast majority of the entrepreneurs in the United States, I do think that they are more reliant on so-called experts to help them build upon and expand that knowledge, and that does hold them back and create a gap. In the United States, we are very independent and not overly attached to hierarchy, which means if we don’t know how to do something, we Google it. In Latin America, I saw many aspiring entrepreneurs waiting for talks, conferences, classes, etc. put on by experts instead of just hunkering down online and getting the information for themselves. Mentorship from experts is absolutely invaluable but, for the nuts and bolts, you can find that information yourself, more quickly with just a little bit of effort online.

More than one of my interviewees mentioned to me that people in Latin America don’t use the internet the way we do in the United States – i.e. to find answers and get information. That needs to change. If you’re an aspiring entrepreneur and don’t know how to do something, your first stop should be Google.

Interestingly enough, despite the tendency to put the United States on a pedestal, I found that many people in the Latin American startup scene had a fundamental lack of understanding of the basics of market size and the effects of macro-economic conditions on their startups, which led to some animosity towards investors from the U.S. as entrepreneurs in Latin America felt they couldn’t get fair access to those investors’ money simply because they were Latin American.

Clearly, the funding funnel has a host of issues that I won’t go into detail about here, but the first thing entrepreneurs need to understand when they’re courting investors is that investors are interested in the return on investment, which is tied to the company’s growth potential, which is tied to market size. The United States has just under 314 million people. Excluding Brazil (because I did not visit it) the largest country, by population, in Latin America is Mexico, coming in at just under 121 million. It is distantly followed by Colombia, with fewer than 50 million people. Some of the smaller countries, like Panama and Costa Rica, fall somewhere between 4 and 5 million people. The number of Spanish speakers in the U.S. is greater than the total population in many of these countries. Additionally, major factors like average household income, GDP, and internet and smartphone penetration make the actual market within any of these countries a far smaller percentage of the total population than in the United States.

To emphasize the point, take a look at this map showing the U.S. states compared to the countries they most closely match up to in terms of GDP. You’ll see a number of the Latin American countries fit neatly into the U.S.’s states. Why am I harping on this point? Because you simply cannot compare valuations of companies attacking the U.S. market to companies attacking the market in a specific country in Latin America; it’s not apples to apples. That is why investors look at the Latin American region and want companies that they’d consider investing in to go after that whole Latin America region. It is not because they are ignorant and don’t recognize or appreciate cultural differences between a Nicaraguan and a Chilean (and there could be an entirely different discussion about whether those differences are smaller or greater than the differences between someone from Massachusetts and someone from Louisiana); it is because not doing so would mean investing lots of time and money into companies that wouldn’t give them an ROI worth their efforts.

So there’s another nice segue into my next point:

As mentioned above, making any one ecosystem within Latin America competitive and successful has a lot to do with making the entire region competitive and successful, so the players need to all work together to make this happen. I met plenty of people that recognize this and are working hard to bring together the entrepreneurial communities across the region, but I also met a number of people that are more focused on competition than cooperation. Remember, for companies to really make a dent and start getting press and attracting the attention of investors, they need to set their sights on the entire regional marketplace. Wouldn’t it be much easier for that to happen if the entrepreneurial communities in all of the different countries and cities were working together and could help facilitate the top companies’ international expansion within the region?

As I noted at the beginning, I’m sure many people will think that I have no basis to have any opinions about the situation in Latin America as I was merely a brief visitor to each city, and they may be right. Whether you agree or disagree with my observations and suggestions, I would love to hear what you think. Please leave a note in the comments section at the bottom of the page and let me know what you see as the positives and negatives in the region. I look forward to a lively debate!