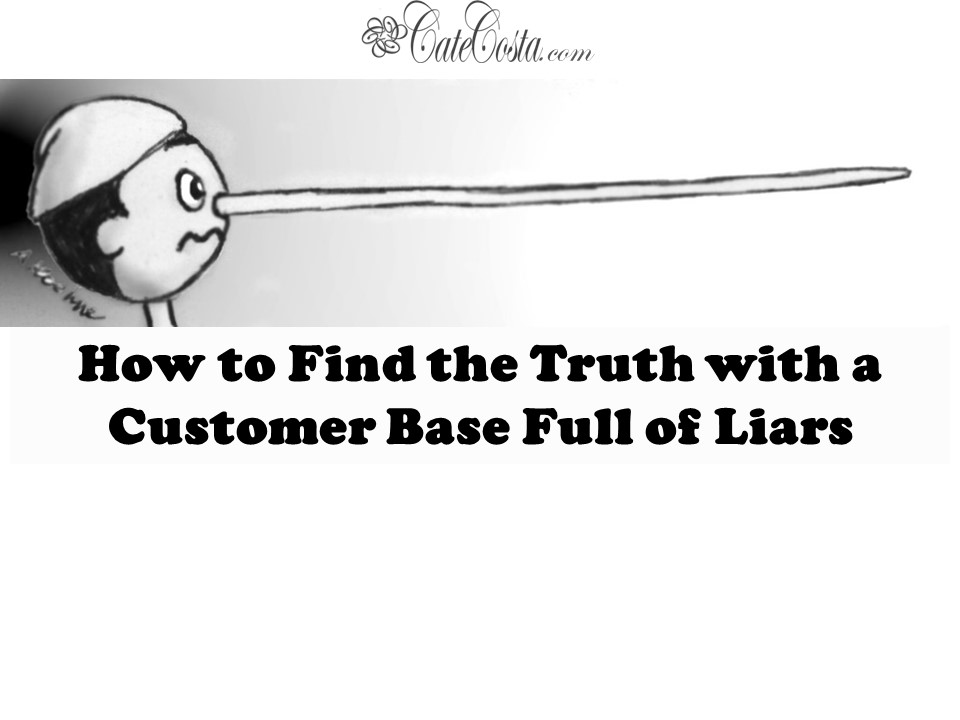 Today I want to revisit a topic that I’ve touched on before – the fact that you really can’t trust your customers to tell you the truth.

Now, I’m not saying they’re all liars but whether it be because they don’t want to hurt your feelings or they’re just really terrible at predicting their own future behavior and understanding their own motivations, it’s incredibly important for any entrepreneur who wants to succeed to understand that just the fact that a customer tells you something doesn’t mean it’s true.

Cindy Alvarez has a great post on this over on her blog so I want to highlight a couple of things here and then send you over there.

First up, Cindy notes that people will use all kinds of qualifiers to try to not sound mean. They’ll say things like, “maybe it’s just me but…,” or “I wouldn’t personally use it but I know other who would…,” or “I’m probably just not the right person but for me…” Don’t ever believe it’s just them. If someone you’re talking to says they wouldn’t use it, don’t understand it, or don’t like it you have to, at minimum, explore what they’re saying further and talk to some other people.

She also notes that you need to be very careful about asking leading questions. Don’t spoon feed people the answers you’d like to hear by saying “do you want X,” or “is Y annoying to you.” They’re always going to say yes but that doesn’t mean it’s really a noticeable pain point in their lives. Let them tell you what they want or need.

And finally, never trust what people say they will pay you for something. Until you actually get them to pay you, you don’t know what they’ll pay. If you must asking something about price, ask what they’re currently paying for the solution you’re trying to replace or even for something unrelated but that saves them roughly the same amount of time that your product or service would. At least that gives you a ballpark of what they feel their time is worth.

For more info on this topic, check out my videos about how entrepreneurs must understand that their customers are liars and how to get honest feedback on your business idea. Then definitely check out Cindy’s post for more of her insights on the topic.