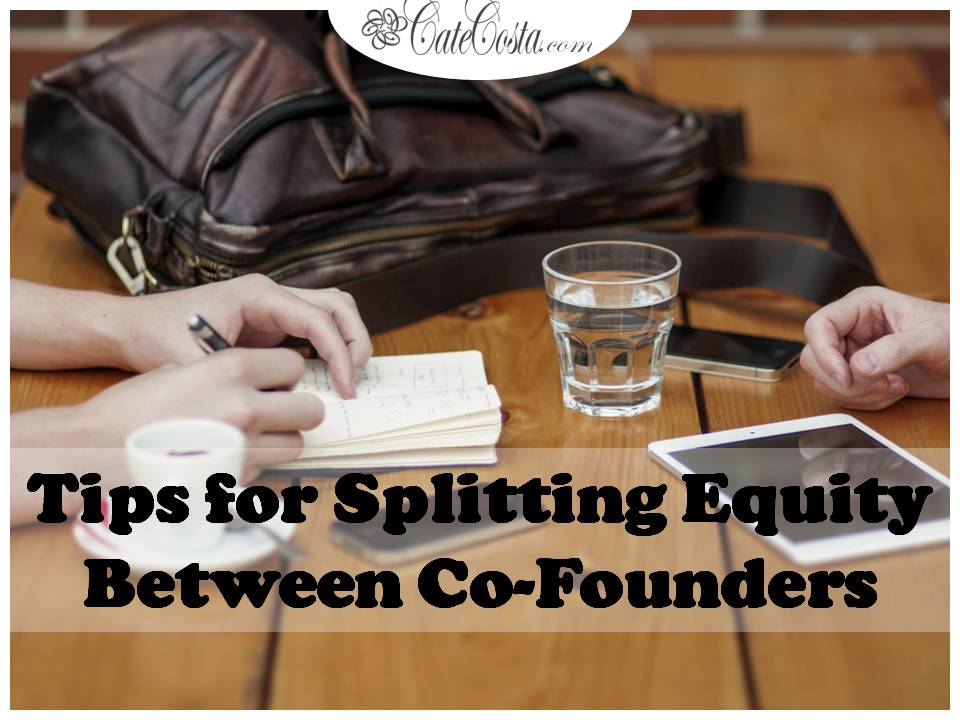 As you put together your team for building your business, it can be a bit of an awkward conversation to sit down and start doling out ownership of a company that doesn’t exist yet, especially if you have personal relationships with the people you’re founding with. Many entrepreneurs find this discussion to be so awkward that they actually put it off and then they have a huge headache on their hands when they don’t have anything down in writing, the company has started to grow, and founders disagree on what direction the company should head in and how much of it each one owns. You can avoid this whole mess by taking the bull by the horns from the beginning and hashing all of this out from the start. Trust me, it’s way less awkward to have these conversations now than it is to have them after you’ve all been working for a year. If you want your relationships and your company to remain intact, get this equity split business handled right away.

So, if you’re with me and you want to get this figured out right away, how do you determine who gets what?

To be honest, there is no right way of splitting up the equity in a startup, but there are a few things to take into consideration with your founders as you determine who’s entitled to how much of the company.

First up is any financial contribution. Some founders chip in cold hard cash to fund a business, some don’t. Clearly, if someone is putting in money, he or she should be compensated for that contribution, just as any investor would be, with equity.

Next up is sweat equity. 99% of the time, startups are built through the sheer determination and hard work of their founding teams and that sweat equity that is put in and not compensated with a typical salary and benefits package should definitely be compensated with equity instead. Be honest about the contributions that each member of the team is making . How much time are they putting in? How integral to the company’s success is the work they’re doing? How much would you have had to pay an outsider to do the same work? Some of you may be working part time, some may be full time, some may be chipping in where possible but not have a regular commitment – all of this is typically taken into account when determining equity splits.

Additionally, most founding teams take the idea and any associated intellectual property into account. Now, how this is done varies widely. If there is formal intellectual property, meaning patents, copyrights, trademarks, etc., brought in by one team member, that intellectual property certainly has value and that value should be noted. When it comes to the idea itself, however, opinions diverge. Some people believe that the person who originally had the idea should get the lion’s share of equity; others believe that the success of a business has so much more to do with execution than the idea that bringing the idea is worth almost nothing when divvying up equity; and others fall somewhere in between these two extremes. It doesn’t matter so much what you believe in this instance, it just matters that you and your cofounders are on the same page about it and get all of these details figured out and put in writing from the beginning.

Finally, you’ll want to make sure that those cofounders who remain involved in the company’s growth and development over the long haul are compensated differently than those who are a part of building the business at the beginning but then depart long before the company reaches success. Everyone, and I do mean everyone, should be on a vesting schedule so that anyone who leaves long before the rest of the founders doesn’t get the same amount of ownership as those who stick around through it all.

Again, these are some factors that are most commonly considered when dividing ownership rights between cofounders and they’ll, hopefully, help you get the conversation rolling with your cofounders and steer that conversation to the most relevant pieces of information, but the key here is that you address the issue and get everything in writing from the beginning – not that you divvy up equity based on a template.