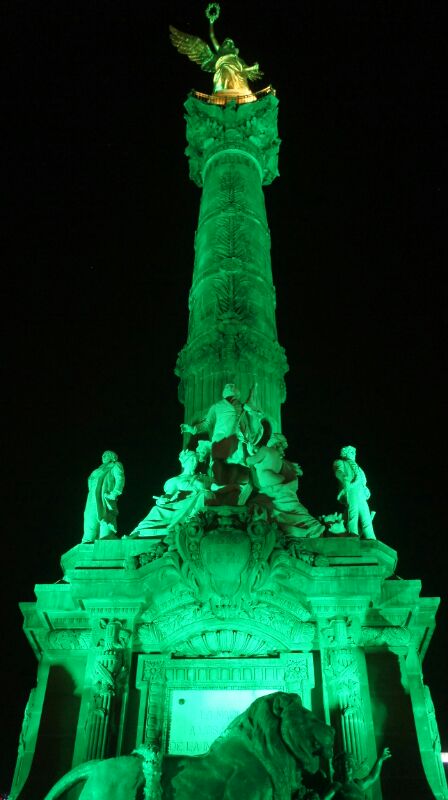 Today’s post really isn’t all that exciting because I didn’t have any grand adventures. In fact, it was the day after I’d gone to Xochimilco, where I’d had a fabulous day drinking and spending time with friends, and I would have happily called it a night early that evening.

However, it was St. Patrick’s day and 1) I am (half) Irish-American (half Puerto Rican) 2) A good friend of mine I hadn’t seen in years was coming to town and 3) I actually happened to be in a city that was participating in Global Greening, so there was no way I was going to stay in. Global Greening is a program that the embassies of Ireland organize around the world every year on St. Patrick’s Day where they turn some of the world’s most recognized landmarks green to celebrate. They’ve done iconic structures like the pyramids in Egypt and the Eiffel Tower in France in the past and this year, it was the Angel de la Independencia smack dab in the middle of my city (my city for that month anyway).

Given all the reasons I had to celebrate, I painted my finger nails green, donned my green garb, picked up my friend at his hotel, and met up with some others at the Angel just after 7pm, the time when the greening was to happen. I have to say, it was a bit anticlimactic. I had expected a bit more fanfare and many more Irish or pseudo-Irish people to be out celebrating, but it was a bit of a dead night. Far less activity than my 2013 St. Patrick’s Day, which I also spent in Mexico City. The Angel did look cool lit up in green though, so here are some pics for your enjoyment 🙂