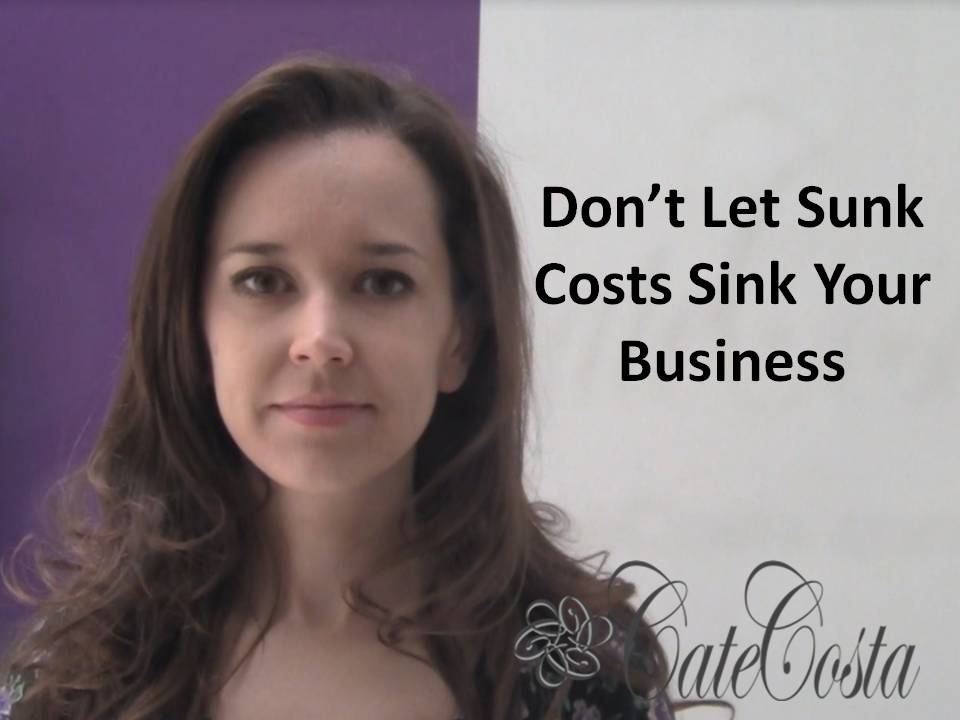 I’ve been in the entrepreneurship world from every angle: as an employee, as a business owner, as a consultant, and as part of the investment team, and one thing that I see every single stakeholder make that can have very negative consequences for the business is succumbing to the trap of sunk costs.

Sunk costs are those costs that are already gone. It’s money already spent that you can’t get back and, therefore, isn’t actually relevant to your future strategy…yet it somehow seems to always keep weaseling its way back into the conversation. Have you ever caught yourself saying something like, “We’ve already put so much into this initiative, we can’t turn back now,” or, “I know we’ve invested a lot of time in this marketing campaign and it doesn’t seem to be working, but we’re in too deep to give up now so let’s just give it a bit more time”? If you have, then you’ve fallen victim to the sunk costs trap.

It’s a natural human reaction to have a negative emotional response to loss, and when you’ve sunk time or money into a project or initiative that isn’t paying off, you feel the loss of those resources. The trouble here, is that that negative emotional reaction causes you to think irrationally and try to eliminate the feeling of loss by sinking more resources into a bad project or throwing good money after bad.

So how do you pull yourself out of this trap so you can manage your business effectively and not run it into the ground because you refuse to walk away from projects or initiatives that aren’t working just because you’ve already invested in them?

Firstly: recognize that money spent is not relevant to the conversation about what to do moving forward. Now I mean this, really recognize that fact and accept it. For example, if someone came to you and said they had an advertising program and for every $500 you spent on ads you would generate $100 in sales, would you do it? Of course not, because it has a negative return on investment and, therefore, makes no sense for your business. So now let’s say you decided to pay for some Facebook ads to promote your new product and you spent $500 on the ad campaign but only made 2 $50 sales as a result of it…would you continue the campaign because it was planned to last for a month and you’re only a week into it? Hopefully no! Assuming you’ve let the ad run for long enough that you have valid data about the way it converts, the $500 you already spent is not relevant. The only thing that is relevant is that the return on investment is negative.

Secondly: set clear expectations for any new project or initiative. Agree on clear goals that will indicate the success of the initiative or project and timelines for when those goals must be reached by. If you get to the deadline and you’re not reaching the goals you agreed upon at the outset, it’s time to terminate the project, period. Don’t allow yourself the option to get caught in the sunk costs trap. Just stick to what you decided before the emotion of lost resources and a failed project entered the picture and muddied your decision making.

Finally: have an outsider spot check you from time to time. An outsider doesn’t have the same emotional investment in the sunk costs of your business, so they will more easily be able to tell you where you’re wasting resources by falling into the trap. You may feel like you can’t invest in new customer relationship management software because you just paid for the system you have now last year, but an outsider will point out that your current CRM system is making you lose money by missing opportunities and making costly errors without feeling any attachment to the system or taking the cost of the current system into account when determining if a new system is worth the cost.

The sunk costs trap gets the best of us and I have yet to meet any entrepreneur who hasn’t fallen victim to it at least once. However, if you employ these methods you can drastically reduce the likelihood that you will continue to be suckered by it and drastically increase the likelihood of succeeding with your business.

Now I’d like to hear from you. Tell me an example of a time that you fell victim to the sunk costs trap and what the consequences were. Then tell me what techniques you use to avoid it. Let me know in the comments section below and, if you found this video helpful or you know someone else who would, please spread the love by liking it and sharing it.