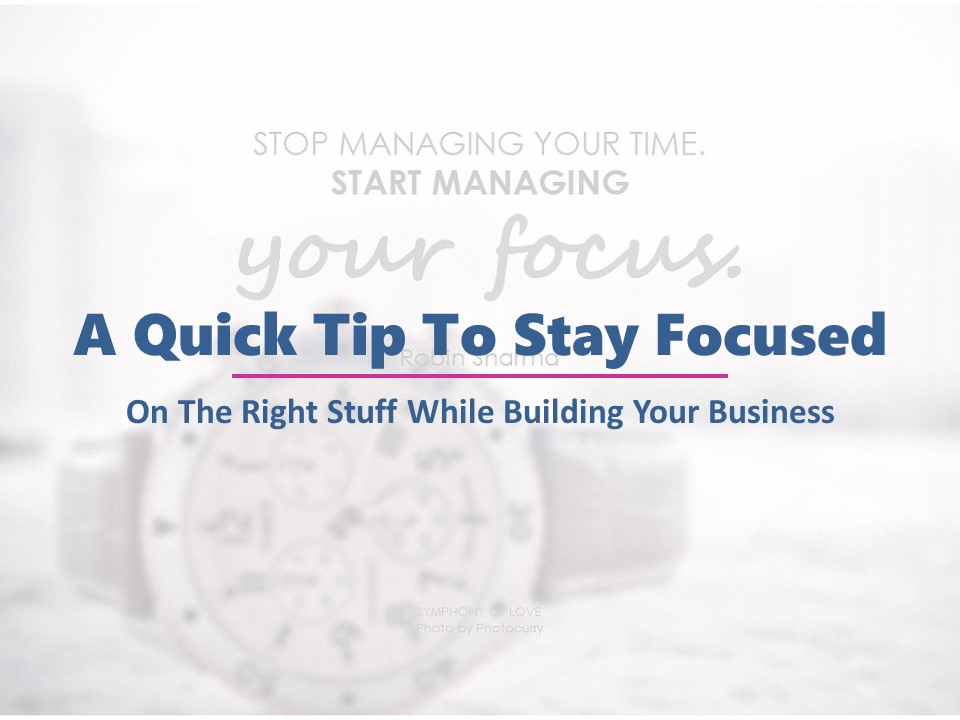 Today I want to discuss the importance of staying focused on building your business and to share a quick exercise to help make sure you’re doing so.

I know that sounds really trite – obviously you need to stay focused to successfully build a business – but just bear with me for a moment. In my work with business owners, one of the first things we do is discuss the barriers to success that the business owner is facing. Inevitably we end up spending a lot of time talking about problems that are deeply frustrating to business owners but that are macro issues, not micro issues, and this is largely a waste of time because you can’t fix the macro issues alone.

I want you to do an exercise:

First, write down everything that is standing in the way of you successfully building your business. JUst keep going and create a complete list of all of the barriers that you feel are blocking you – macro, micro, personal, professional, legal, whatever. Jot down everything that comes to mind.

Third, separate the list of barriers which you can’t control into those you can influence and those you cannot influence. For example, I know a business owner who works in a sexist industry so she goes by her initials, not her name. She obviously has no control over the sexism, but she can influence how and when it affects by not making her gender apparent until she’s well into the proposal process and the buyer has already more or less decided that she’s the best.

For those items on the list of things you can’t control but you can influence, what’s your strategy for nudging things closer to being in your favor? What’s your version of using your initials instead of your name? Create a strategy for every single item. Another example might be that you can’t control when your customers pay you but you can definitely influence it by creating payment terms, contracts, and/or billing procedures that will get most people to pay you faster. If you decide you really can’t come up with a strategy for an item on this list, move it over to the can’t control and can’t influence list and stop thinking about it.

For those barriers on the list of things that you can control, come up with a strategy for how you’re going to deal with it. For example, if you need a loan for a piece of new equipment but your personal credit score is a barrier, get with a financial coach and implement a plan to improve your credit score so you do qualify.

This is what separates the business owners that will succeed from those who won’t: taking ownership of what’s in their control and doing something about it while not spending time and energy on what they can’t control.

Now, to be clear, when I say don’t think about it, I mean during the time that’s meant for building your business. Many of the barriers you’ll see in the can’t control pile are major social problems like racism and sexism that absolutely should be dealt with. The key though, is that you understand that attempting to combat these macro issues is something you’re doing because it’s the right thing to do and you care deeply about improving society; it’s not something you do because it’ll help you get business. These problems are simply too big and will take too long to fix for your business’ growth strategy to be to eliminate racism in contracting.