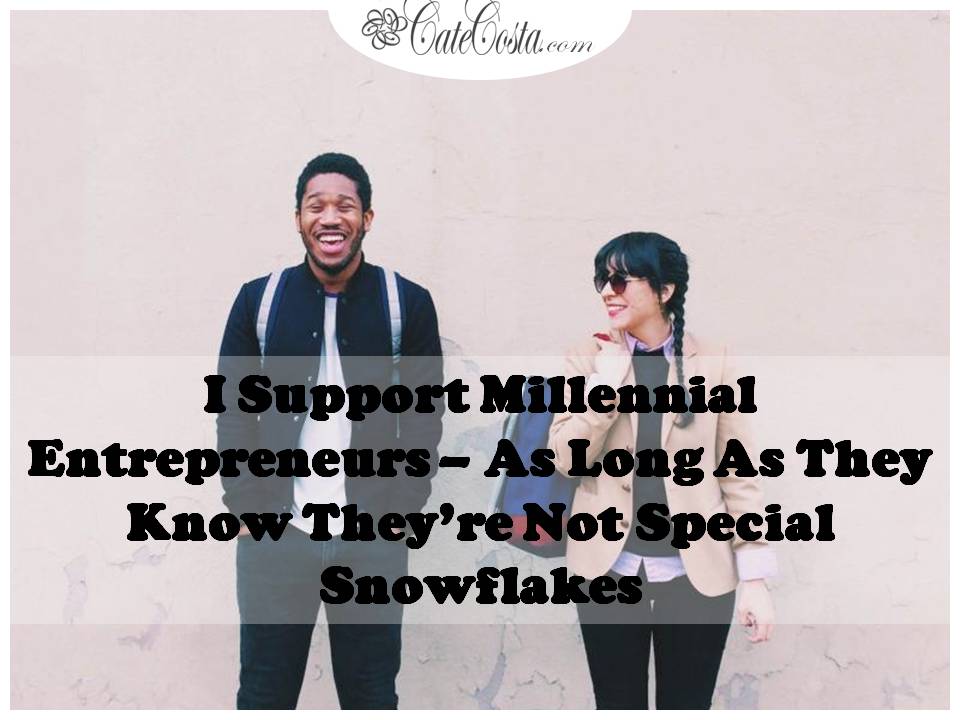 This week we’re talking about millennials and entrepreneurship. Admittedly, it’s going to be a bit of rant, but I hope you’ll stick with me for a minute here because it seeks to get you thinking honestly about whether you’re ready for the realities of entrepreneurship…fair warning, Debbie Downer alert.

In case you’re unsure, I am a millennial. I’m definitely at the older end of the generation and I wouldn’t say I wear the millennial badge with any particular honor, but I don’t wear it with shame either. Now, I say we’re talking about millennials and entrepreneurship this week, but we’re really talking about entrepreneurship in general. What millennials are accused of is true of the vast majority of aspiring entrepreneurs across all age groups, and that’s a misguided belief that you’re somehow special and, therefore, deserving of great success.

Depending on whom you ask, millennials are those born in or after either 1980, 1981, or 1982. It seems nobody’s really decided on the end of the generation yet either, but as many of these millennials have clearly started having kids of their own at this point, someone needs to get on naming the generation that follows us.

Anyway, a lot has been said about our generation. Apparently we are spoiled, entitled, lazy, and believe we are all special snowflakes and deserve to be rewarded greatly for merely existing. We grew up with our parents protecting us from the evil outside world and we received trophies just for showing up to the competition, even if we were terrible and came in dead last, and that’s why we now suck. At least according to some. Basically, the older generations think we’re brats. Even my boyfriend, who by many definitions is, in fact, a millennial himself as he was born in 1981, loves to trash talk the millennial generation and will vehemently deny he is a member of it because he doesn’t want to be associated with the rest of us narcissists. I’m probably going to be sucked into a 20 minutes argument about this tonight, actually, once he’s read this post, because he won’t take kindly to my public accusation that he is *gasp* a millennial.

While there are certainly aspects of this brattiness that may be present in millennials, I would argue that that has more to do with the fact that we are the youngest professionals out there. We’re talking about a generation that is – for the most part – in their teens and twenties right now. Weren’t you all brats in your teens and twenties too? Come on. The way I see it, we’ve been at war for our entire adult lives, next year will mark as much of my life being lived in a post- 9/11 world as in a pre- 9/11 world, we’ve suffered the fallout of the great recession for most, if not all, of our adult lives, and, despite being the most educated generation ever, we’re drowning in the debt we had to take on to pay for those educations because we’re still hugely underemployed. The Boomers who raised us to believe we could be anything we wanted to be love to tell us life is tough and get over it; that we should feel lucky to have a job that requires zero brain power and doesn’t pay us enough to cover our student loans, let alone our rent and our student loans, but “requires” a master’s degree. Well, perhaps we are brats, but many of us have started to call bullshit on that.

And that brings me back to entrepreneurship. Given the craptastic job market millennials have been faced with since we entered the workforce, it’s not tough to understand why “71% of millennials at ‘regular’ jobs would prefer to quit and work for themselves.” While I do eventually plan to head back to the “normal” workforce, I built my own business because it was the only way for me to make anything resembling a reasonable amount of money while still being able to truly enjoy my work. The flexibility to travel the world as I do was also quite the perk that would have been absent from a standard job. Am I millennial princess to think that I shouldn’t have to work 80 hours per week at a job I don’t enjoy in order to be able to save some cash or buy a house? Maybe, but that’s neither here nor there.

So let’s finally get back to the title of this post. Millenials, if you think you deserve better than your day job and you want to start your own business, I completely understand and I support you. However, you probably have a bloated sense of self-worth by virtue of the fact that you’re part of this generation so it’s important to note that you’re not alone in this desire and:

Remember, there are no participation trophies in entrepreneurship and you are not a special snowflake. By all means, follow your entrepreneurial drive, but remember to do so the right way by properly developing your idea and creating a plan for your business before you risk it all on the belief that you will succeed because you somehow deserve to succeed. We’re millennials, we grew up with technology, we should be sure to put it to use to help us get the information we need to successfully build a business before we get too deep in. Do some market analysis, learn who your competition is, find out how much a real marketing plan will cost you to implement. You get the idea. Google is your friend.

Oh yeah, and since you’ll likely not make much (if anything) your first year in business (even if you do eventually succeed), check out this article from my favorite millennial-basher (a.k.a. my boyfriend) about how to use a year without income as a tax strategy.